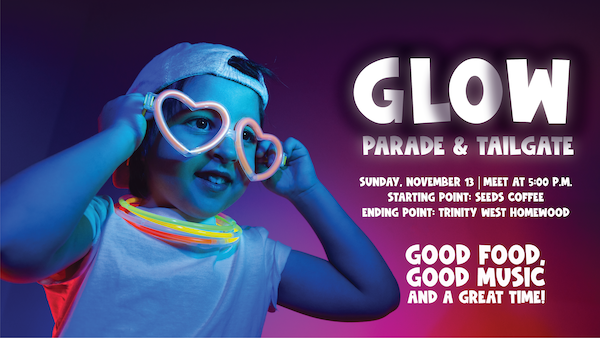 Mark you calendars and make plans to join us for the Trinity West Glow Parade on Sunday, November 13. We are going to light up West Homewood! Last year’s Glow Parade was such a hit that we hope this year can be even better. This parade is unlike so many others because we don’t want spectators. We want you to join in! A parade is to celebrate something great is happening, and we think something great is happening at Trinity West Homewood.

The parade will begin by gathering down at Seeds Coffee at 5:00 pm where everyone will dawn their glow gear. And don’t worry, we will have plenty of lights and glow sticks for everyone that needs them! The parade will start shortly after that as we head down Oak Grove Road. The route will end at the Trinity West Homewood front lawn where we will have a huge tailgate set up with inflatables, food, and music.

Everyone! There is no age or species limit. We want all of our friends in West Homewood and beyond to participate in this parade because we think something great is happening and it needs to be celebrated.

Do I need to bring my own glow materials?

We will certainly have glow materials aplenty to go around, but we hope you will get creative and bring some glow stuff of your own too! Amazon, Target and Dollar Tree are great places to start with your glow material, but if you can’t find any or you don’t get it, don’t worry! We are ready to help you GLOW.

What can I glow?

Can I leave my car at TWH before the parade?

YES! Come and park at TWH before the parade begins, and we will be shuttling people in our bus down to the starting location. We will stop running the bus at 4:20. Beginning at 6:00 we will have regular runs back to Seeds Coffee so you can get to your cars safely. 👍🏼

We will also be needing folks to host a tent and provide a treat. Go ahead and reserve your tent and tailgate food of choice below!

Be A Tailgate Host!

What all will be provided to tailgate hosts?

When can I set up my tailgate?

You can begin setting your tailgate at 3:00 pm that afternoon which gives you plenty of time to make it to the parade following. We will start running our bus from TWH to Seeds Coffee starting at 4:00 pm and ending at 4:20 pm.